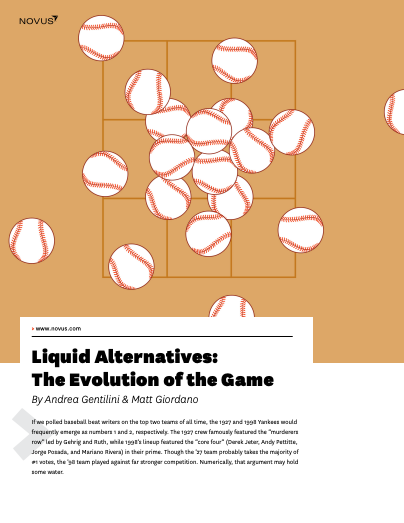 Liquid Alternatives - The Evolution of the Game

Since 2003 the number of hedge funds has doubled—with 85% of that rise occurring between 2003 and 2007. Moreover, the number of unique securities held by our proprietary Hedge Fund Universe rose concurrently with the number of funds. One might surmise that, despite the lack of post-crisis alpha, these aren’t distressing numbers within themselves, as the space could be expanding to pursue a variety of different strategies and ideas. Thus, this type of growth could be fully justified, and the lack of alpha could be due to other situational factors.

But has it been? As it turns out—probably not. The security-level overlap between managers’ portfolios has similarly increased, rising about 300% since 2003. Security-level crowdedness within both the S&P 500 and the HFU has likewise risen in tandem. The space has expanded and there’s been reversion to the mean.

In this piece, we look at the evolution of skill in liquid alternatives and the availability of public data to understand how it affects hedge funds and the current market environment.